Carved out 1100 sqft in the city I love to call my own! 🔑🏠
Murphlip the Senate 🍑💙
Scenes from the fall (🍁)
It's my birthday 🎉! This month also marks my three year anniversary at @networkforgood. It's been an incredible ride - as the company has grown, so too have the number of partnerships we've been able to foster with small (but mighty) nonprofits, nationwide.
Last week I flew to south Texas and joined a grassroots campaign to send @jcisnerostx_ to congress.
Since everyone and their mother is doing it, I couldn't help but gather some moments in time from the year that rounded out a decade. It was one filled with puppers, laughs, celebrations, volunteering (🇭🇳 & 🏀), travels (🇨🇴 & 🇵🇷), friends, family, and of course, a good duckface here and there. Onto the next 10er.
Some SoFL shots 📸
Happy 2️⃣1️⃣ to my amazing, not-so-little sis @_annamurphy_ 🍾🍾
Get you a squad that can do both 🎃⚾
#tbt rubbing elbows with the Clooneys + celebrating the first annual #asilgala @ the Frick Museum in NYC. Wasn't bold/important enough to get a posed pic with the guests of honor, but did sneak into a few candids (pics 2&3).
Laguna matata, what a wonderful phrase 🚣🏼‍♂️.
Mar rosado, las salinas de Galerazamba 🇨🇴
🇨🇴 views 🇨🇴
Qué bueno verte de nuevo, Colombia 🇨🇴
Mr. Camel, Habibi, Ha-bby -- my sword in the darkness, co-coach, draeft consigliere, and brother. You bring so much joy to the world and yesterday, the world gave you the ultimate joy. Here's to you and @hillennial - to a life of escape and wonder. 🥂💍
Clinging on to the last days of summer //
El Yunque 🌳 //
Kings in the castle 🏰

When you arrive in Reykjavik, the first thing locals tell you to do is to get out of Reykjavik. Curious, the city seems to be charming and well amenetized, why is everyone so quick to leave?

The short answer is that the Icelandic countryside is like something out of a fairy tale, begging to be explored. To venture out beyond Reykjavik is to step into Westeros itself (without the murderous weddings, incest, and zombie hordes, I’m assuming…)

Of course, it’s best to form a sort of fellowship or traveling group before taking on an epic adventure. Luckily I found my companions in the form of Ash and Mukund, two Indian-born, Seattle-based, very cool dudes on vacation here for a week. They both received their Masters from the University of Florida, and upon graduation were courted by Microsoft and have been in Seattle working there ever since. After striking up conversation with the two on the first night in the hostel, they said they had rented a car and invited me to join them for the famed Golden Circle route. I happily accepted.

The three of us got an early start the following morning and set out on the ~240 km excursion.

Having both grown up near Chennai in the Tamil Nadu state of India, Ash and Mukund are intimately familiar with the tragic floods that devastated the region in the final months of 2015. They described how the floods ravaged homes and places of business, some of which belonged to people they know. They were also quick to praise the efforts on the ground that made recovery possible. People were welcoming in others to their homes, offering food and shelter to those displaced by the floods. Aid flowed in from surrounding regions. It was an uplifting example of a community rallying together after a horrific calamity.

Another example of communal unity is the people of Iceland. Just 320,000 strong, their population is essentially the same as Cincinnati, Ohio, spread out over a 40,000 sq. mile island. If it’s not the extreme cold that brings Icelanders together, it is surely their fierce and resolute devotion to the natural landmarks that make the country so beautiful.

(Side note: There is an app here that helps Icelanders determine if the person they are trying to hook up with is related to them. Seriously. Maybe this place is even more like Westeros than I thought…)

One of our first stops was Thingvellir National Park, home of the Pingvallavatan, the largest lake in Iceland. The park also boasts the “meeting point” of the Eurasian and North American tectonic plates. The two plates are being pulled apart by a few centimeters each year, adding to an ever-growing rift valley known as the Almannagja.

As if that weren’t fascinating enough, Thingvellir is also an incredibly important place in Iceland’s history as a nation:

So with all this incredible history, there should be some signage and statues and gift shops and capitalism and whatnot marking this as sacred land for tourists to throw their money at, right?

Nope, if not for a small explanatory panel you wouldn’t know the land had any historical significance. To me this is a testament to the profound respect that Icelanders have for these natural landmarks, even at the expense of their own history as a society. While they thankfully welcome tourists like myself to take in these wonders, they certainly have not welcomed commercialization.

Next up was the towering geyser, Strokkur, located in the Haukadalur valley. Erupting every 4-8 minutes, Strokkur is a stark visual example of the geothermal activity brewing beneath the surface all over Iceland. Surrounding the geyser are a multitude of mud pools, fumaroles, and algal deposits.

The thick smell of sulfur aside, seeing all of this geothermal activity at work made me think about clean energy, and how much of the world barely takes advantage of clean energy opportunities. Apparently geothermal energy accounts for over 26% of electricity production in Iceland, with another 73% from hydraulic power and a mere .1% from fossil fuels.

Beyond that, clean energy and energy conservation is clearly an important talking point for business leaders from all over the country. While checking out the Harpa Conference Center in Reykjavik, I stumbled upon the Iceland Geothermal Conference. Gatherings like these allow investors and industry leaders to make note of future goals and direction for energy production. Also, the WiFi connectivity was fantastic.

Doing. It. Right. Take note, rest of the world! 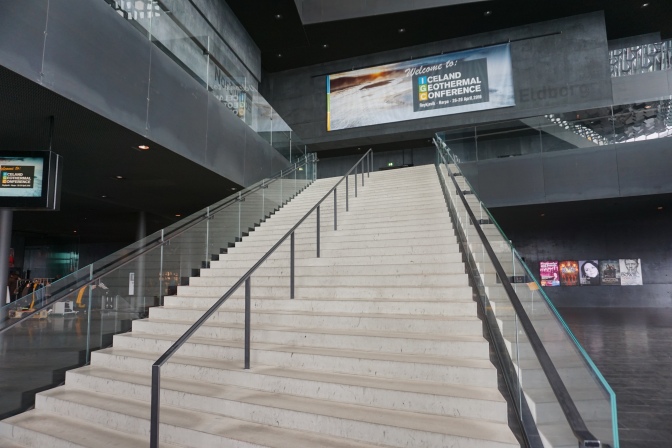 Our final stop was Gullfoss – a massive, powerful, cascading waterfall that spills from the river Hvita and plunges 70 meters into the canyon that surrounds it. Here we find another example of Icelandic defiance to industry.

In the early 20th century there were many who felt strongly that Gullfoss should be harnessed for the production of electricity. There was a great debate within Icelandic society about the merits of both sides. The owner began actively looking for domestic and foreign investors to purchase the land. Rumor has it that the daughter of one of the advocates for industrializing threatened to throw herself in the falls, should their condition be altered.  Ultimately, the efforts failed and Gullfoss was acquired by the State of Iceland in 1940 and is now preserved. 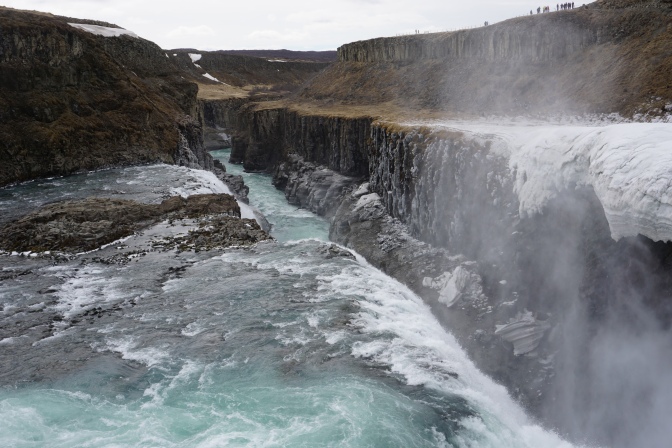 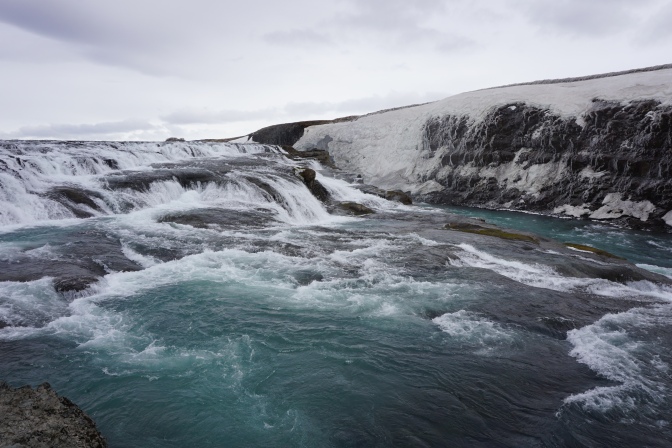 One local tells me that Icelanders have a phrase used after someone suggests something stupid: “And then what? Sell Gullfoss?” It is considered priceless in its natural state I suppose.

7 thoughts on “The Land of Ice and Fire”