This was perhaps the most quotable moment of a night spent on the Lysefjord outside Stavanger, Norway. It was an elegant evening, featuring delicious food, good beer and wine, and breathtaking views of the Norwegian Fjords.

The man who delivered the line was Commodore Robertus, a decorated veteran of the Royal Netherlands Navy. It was a candid moment, and one I did not expect. I used to identify “sucks” as a wholly American term. Though I suppose the Commodore has spent his fair share of time with Americans over the years and our vernacular may have rubbed off on him, for better or for worse.

Rewind to three days prior and I am stumbling out into the train station of Stavanger after a grueling eight hour ride from Oslo. I feel lost for just a few seconds before I see Dakota walking toward me. It’s damn good to see a familiar face, especially one of a best friend.

The last time him and I were out of the country together was a little over three years ago. We were broke college kids, on the cusp of graduation, who scraped together enough money to fly to Cancun for a pretty epic final spring break. Now, three years later, Dakota is working for NATO in several capacities. Here in Norway he is primarily acting as a program coordinator for a steering committee comprised of 11 NATO countries and Australia. The purpose of this committee is to foster collaboration among these countries, specifically geared toward the development of a cutting edge missile system, which I know so little of that it’s pointless to even write about.

After shedding my baggage at the Clarion Hotel in downtown Stavanger, we freshen up and walk a few blocks to the harbor for a few beers.

He tells me all has gone well with the conference thus far, but that it has proven to be stressful to ensure everything proceeds according to plan. I can only imagine. A gathering of people from all over the world, of all types and temperaments, together in a foreign country, expected to collaborate and deliver results with a whole lot of money and prestige on the line. From high-level military officials, to industry leaders from companies like Raytheon and Lockheed Martin, to hardened veterans turned-businessmen, to accomplished intellectuals, gifted engineers, and rocket scientists from institutions like Johns Hopkins (yes, rocket scientists. Needless to say the company we kept these past four days was vastly different than in Cancun…). It was certainly an elite concoction of brilliant people

And Dakota shoulders the load of making it all run smoothly. My heart swells with pride for how hard he’s worked and for the person he’s become (but I’ll never tell him, guys don’t do that).

The next morning we wake up to a delicious breakfast and get ready to take on the Pulpit Rock (or Preikestolen in Norwegian), the first of two outings that I was lucky to join in on.

The hike ended up being close to two hours including stops for views and pictures. In total it is a 6km trek of mostly rocks.  It was without a doubt one of, if not the most, epic hikes I’ve ever been on.

I was shocked at how deftly some of the older members of the committee scaled the rocks all the way to the top. People thrice my age were moving with unexpected speed up the side of the fjord. Sharp minds, sharp bodies I suppose. 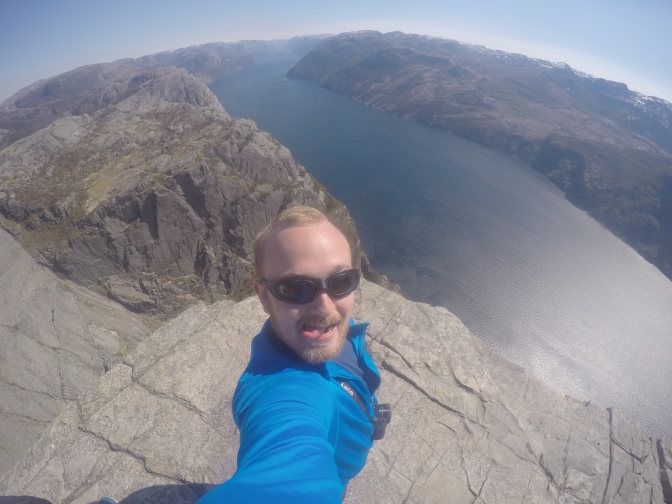 It’s interesting that this steering committee picked Norway as its destination. In terms of finding a gathering spot to iron out the technical details of the program, they could have gone with a number of different locations. What separates Norway, and specifically Stavanger, from the pack is its amazing natural marvels and their ability to make a person feel humbled.

The cliffs of Pulpit Rock were formed during the ice age over 10,000 years ago. When the edges of a glacier reached the rock, it became embedded in the mountain, frozen in its crevices. Eventually when the glacier retreated it broke off large blocks of rock, creating the towering cliff we see today.

Sitting on top of Pulpit Rock, sun weary and legs feeling like jelly, I arrive at a buzzing sense of inner peace and reflection. I think about how old this incredible natural landmark is, and how much longer it will be around after I’m gone. I reflect on the things I want to accomplish in my life, the things I should say to people that I should have said long ago, among other feelings.

I look around at the other committee members who made it to the top. I wonder if they’re having a similar sense of reflection, if they are considering what they have achieved this week, and if they are wishing they had done something differently. Perhaps a grueling hike followed by the reward of a sweeping view of the Norwegian Fjords could lead to contemplation and, ideally, compromise. With the well-being of the world at stake, I am starting to realize why Norway was the choice destination.

This is further apparent when we take to the water a few nights later for our dinner cruise through the Lysefjord.

After a long week of work and intense discussion, this seems like a great way to release and perhaps diffuse any lingering tension. A delicious spread of food, open bar, great weather and fantastic views; I’m just happy to be along for the ride.

I get to chatting with a number of the committee members. I do best to avoid topics of their work, as I’m sure it’s the last thing they want to discuss after putting in many hours throughout the week. Still, I enjoy picking their brains on their careers outside of the steering committee, their favorite travel destinations, football squads of choice, and opinions on the state of American politics (coming from non-Americans, this is a particularly awkward yet interesting discussion. Will definitely have to write a separate post about everything I’m hearing while abroad.)

Near the end of the night American Admiral Hill takes the podium and delivers a rousing summation of the conference’s events. He praises the productivity and conviction of all those in attendance. Then he turns the floor over to Commodore Robertus. Hill presents him with a plaque to commend his service to the committee. Robertus has served since the inception of the committee, some six years as a leader of the directive. Robertus is clearly a gifted orator and a seasoned leader of men.

Aside from stating the suck-iness of international collaboration, the Commodore has further choice words for the committee members.

“It’s gatherings like this that keep the world turning. Smart people uniting together, having smart conversations, making smart decisions.”

His words ring true. The general safety of the world hinges upon gatherings like this; getting the brilliant minds of the world together to coalesce and find ways to reach agreeable defense accords.

As a disillusioned, politically coherent young person, I have a healthy skepticism about my country’s commitment to being the world’s “police”. We spend massive amounts of resources to ensure our continued presence as the world’s superpower, often at the expense of problems we have at home.

All that said, I also grapple with the good that this does.  Our ability to project force on a global scale quickly and efficiently keeps the world in order. Working together with other nations in assemblies such as this one ensures streamlined communication, and ultimately fosters safety worldwide. The great Teddy Roosevelt perhaps said it best, with regards to his foreign policy.

The development of cutting edge military grade technology lends itself to this ideology. There are bad people in this world, and there are large groups of good people and nations without the ability to defend themselves from the baddies. NATO and the UN are both examples of collaborative groups designed to mitigate global crises. On a micro level, this steering committee does the same.

International collaboration may “suck” but it’s necessary to ensure the wellbeing of billions.

In the end, I feel satisfied knowing that these meetings of great minds occur, and that they sometimes occur in other-worldly places like Norway. I feel blessed to have stepped into their arena for a brief moment.

And I feel blessed to have done it with my best friend, one who I will definitely be joining for future travels. Where we go next is anyone’s guess. What I do know is that going anywhere with him is guaranteed to be an epic adventure. 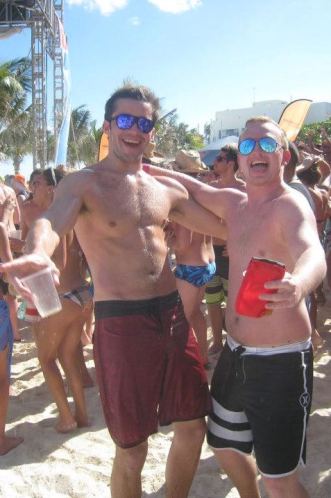 A lot has changed in three years, and yet nothing at all.

7 thoughts on “International Collaboration in the Fjords of Norway”