Carved out 1100 sqft in the city I love to call my own! 🔑🏠
Murphlip the Senate 🍑💙
Scenes from the fall (🍁)
It's my birthday 🎉! This month also marks my three year anniversary at @networkforgood. It's been an incredible ride - as the company has grown, so too have the number of partnerships we've been able to foster with small (but mighty) nonprofits, nationwide.
Last week I flew to south Texas and joined a grassroots campaign to send @jcisnerostx_ to congress.
Since everyone and their mother is doing it, I couldn't help but gather some moments in time from the year that rounded out a decade. It was one filled with puppers, laughs, celebrations, volunteering (🇭🇳 & 🏀), travels (🇨🇴 & 🇵🇷), friends, family, and of course, a good duckface here and there. Onto the next 10er.
Some SoFL shots 📸
Happy 2️⃣1️⃣ to my amazing, not-so-little sis @_annamurphy_ 🍾🍾
Get you a squad that can do both 🎃⚾
#tbt rubbing elbows with the Clooneys + celebrating the first annual #asilgala @ the Frick Museum in NYC. Wasn't bold/important enough to get a posed pic with the guests of honor, but did sneak into a few candids (pics 2&3).
Laguna matata, what a wonderful phrase 🚣🏼‍♂️.
Mar rosado, las salinas de Galerazamba 🇨🇴
🇨🇴 views 🇨🇴
Qué bueno verte de nuevo, Colombia 🇨🇴
Mr. Camel, Habibi, Ha-bby -- my sword in the darkness, co-coach, draeft consigliere, and brother. You bring so much joy to the world and yesterday, the world gave you the ultimate joy. Here's to you and @hillennial - to a life of escape and wonder. 🥂💍
Clinging on to the last days of summer //
El Yunque 🌳 //
Kings in the castle 🏰

This post will be mostly pictures, as words alone can’t hope to capture the dreamlike essence of the World Bodypainting Festival. 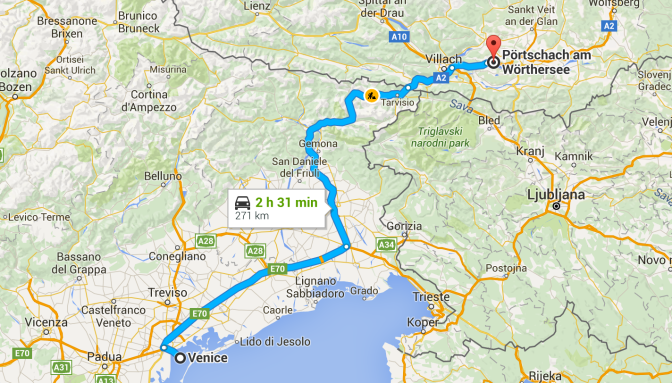 Featuring over 300 participants from 45 countries, the WBF is a truly international event. Gathered here are the very best bodypainting artists from every corner of the world. For three days these talented individuals work tirelessly, manifesting their imagination into tangibility, resulting in colorful and epic displays of human art. Their creations are then entered into the competition, which was interwoven into the festival.

Pörtschach am Wörthersee, Austria, the lakeside town which hosts the weekend event, provided the perfect setting for three days of music, nature, and incredible artwork. 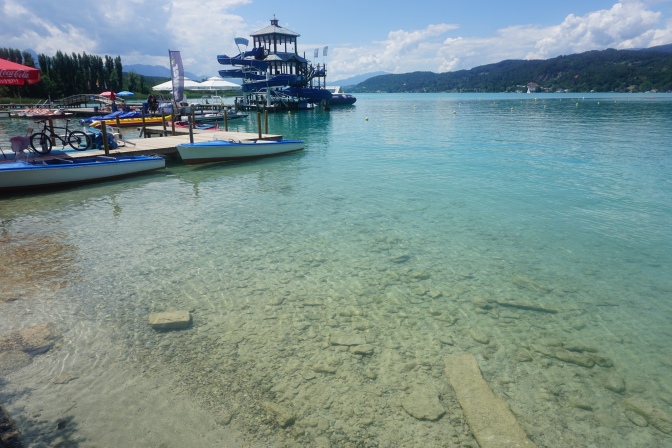 When I arrive on the first day, the artists are already hard at work. They are given six hours to prepare their models every morning. It is mesmerizing watching the focus of the painters, and equally mesmerizing watching their work unfold. The tents are open to the public so all can appreciate the intricate and arduous process. 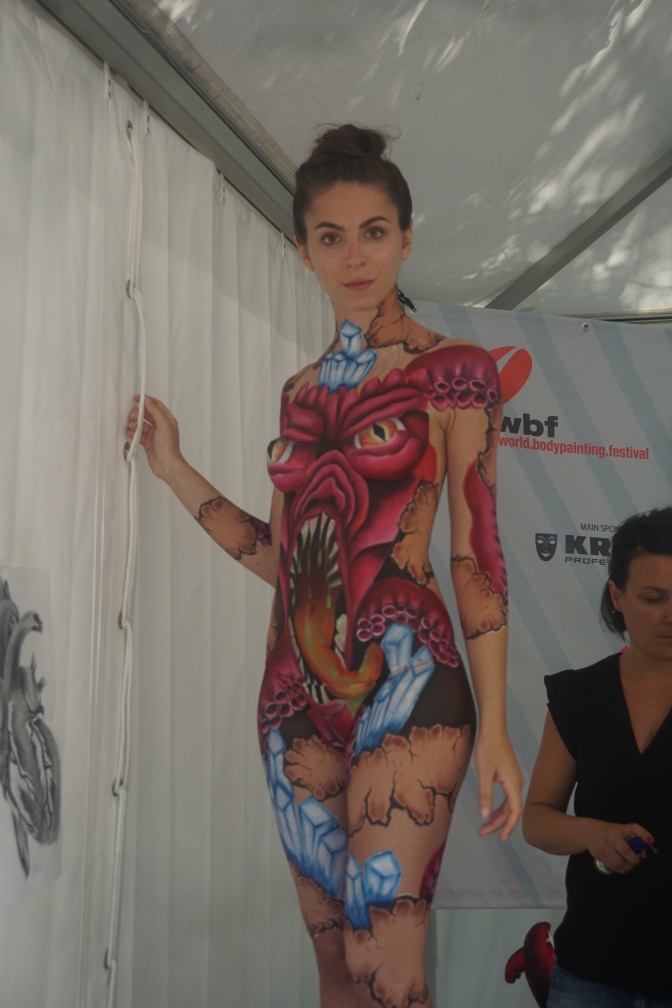 Once their work is done the models meander throughout the festival grounds, drifting from place to place like faeries, showing off their artists’ creations proudly and elegantly.

The grounds feature 5 stages, each with a different kind of music (Reggae, hip-hop, alternative, etc.) performed by an eclectic variety of international musicians. There is a beach zone, electronic/techno pier, yoga area, art exhibitions, music workshops, food trucks, bars, and a lifestyle market with a variety of vendors.

Surrounding it all is a beautiful turquoise lake, lush foliage, and forestry. It provides the perfect, ethereal setting for the models to display their artists’ imaginations made real. 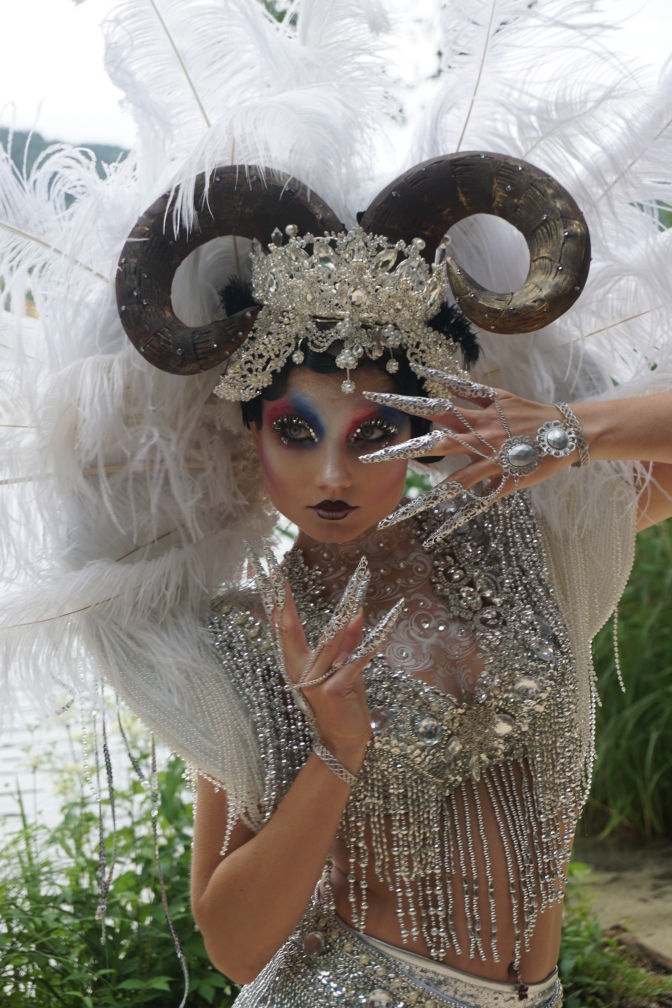 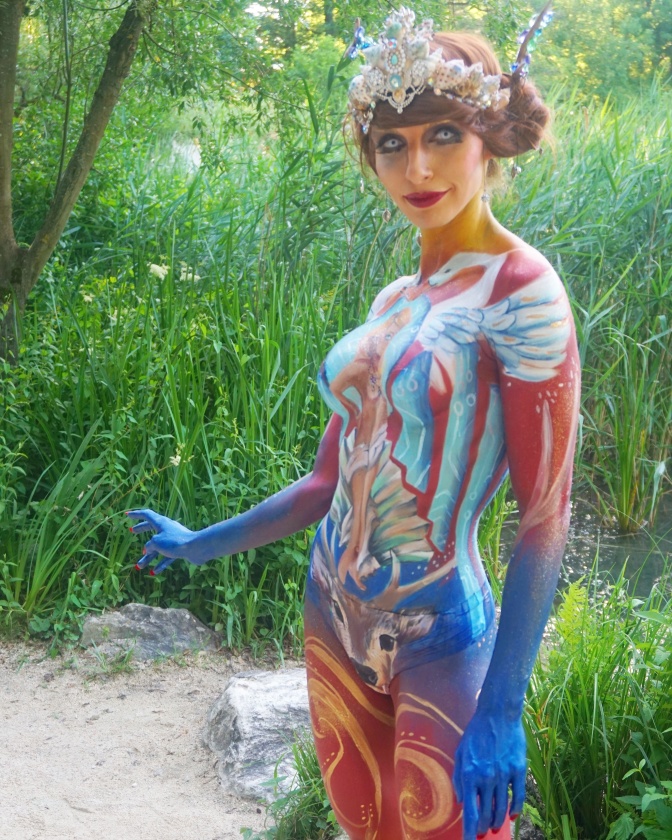 The first two days of the festival have the broad theme of “Metamorphosis – The Art of Transformation”. The ambiguity gives the artists free reign to conceive an idea that best fits with the theme in their own mind.

Of course, I can’t resist a few selfies.

Every night, the models gather at the main stage and do a walk-about for the press and judges. Over the three days the artists accumulate scores for their work. On the third night the winners would be announced for three categories: Brush and Sponge, Airbrush, and Special Effects.

Some models walk around and pose to slower music, others opt for more upbeat music and do a variety of expressive dances to engage the audience and judges. 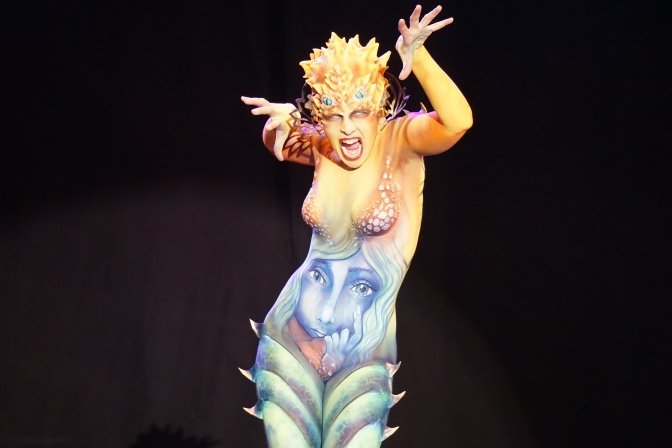 After the final models have walked across the stage, each night turned into a dance party til the wee hours. The second night, a rock/hip-hop German band called Mono & Nikitaman performed. They were electrifying, I really got into it despite not knowing what they were singing or rapping about. 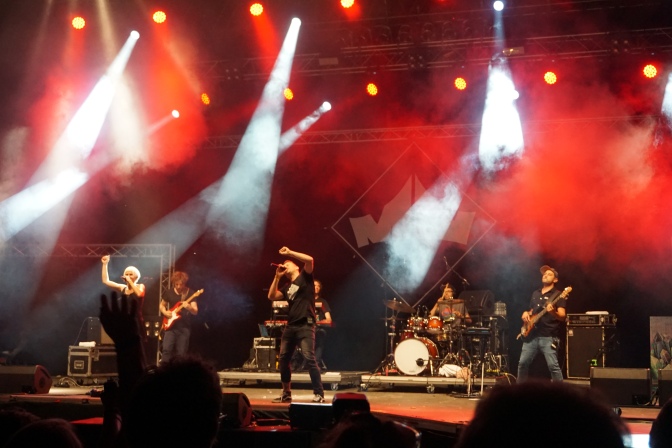 Some of the models even came into the crowd and danced with us normal people. I meet Manuela, a young Austrian woman who entered into the competition as a model with her sister, the artist. I ask her where she calls home.

“Home is where your pants aren’t…I’m home right now.”

She says she has been coming to this festival since she was a child. It had been a dream of hers to someday enter the competition with her sister, and that day she attended as a model for the first time.

At that point I really had no idea how much the models go through. Standing/sitting still for 6 hours while the artists paint is just the beginning. Manuela explains that she had to constantly be monitoring her movements, barely eat, and avoid going to the bathroom for upwards of 12 hours. They are constantly getting touched up by the artists and hounded by scores of people looking for photos or selfies. All while smiling, posing, and generally putting on the best performance to give her team a chance to win.

Manuela says she doesn’t regret anything and that she would do it again in a heartbeat (as she plans to next year).

I show her a picture I took of her earlier that day, before we formally met, then she asks me to take a picture of her with the crowd behind. 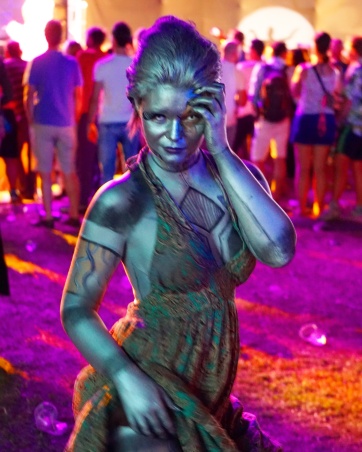 The theme for the final day is “Propaganda – Control of the Public Mind”. Once again the artists are given the creative freedom to bring their ideas into existence while loosely aligning with the theme.

Some artists choose to deliver resolute messages, others are more subtle. I’ll let you derive the meanings for yourself. 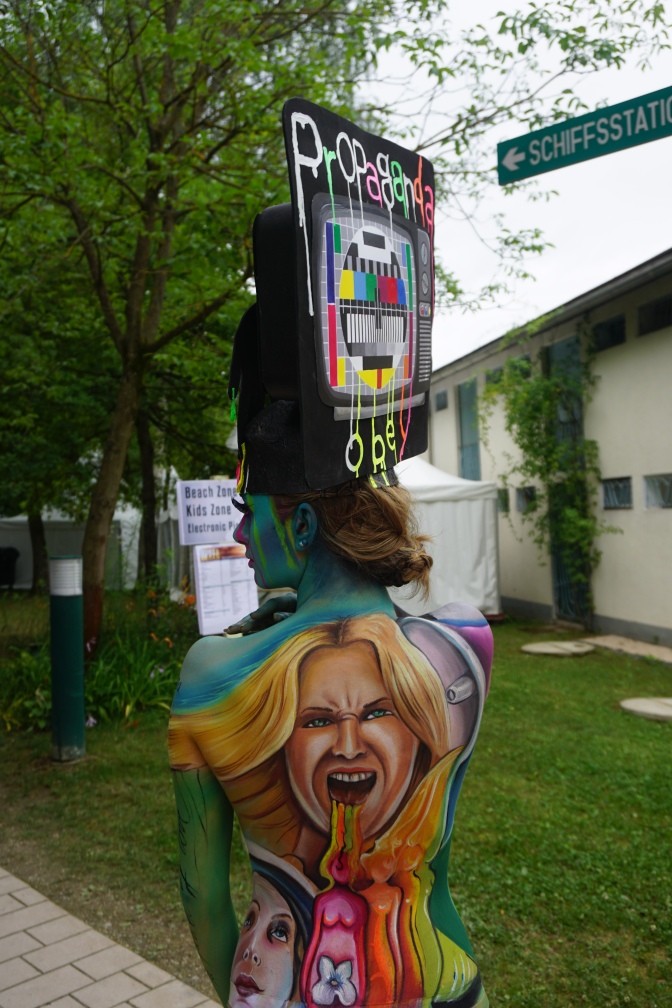 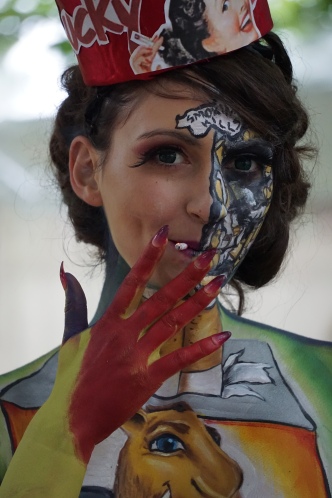 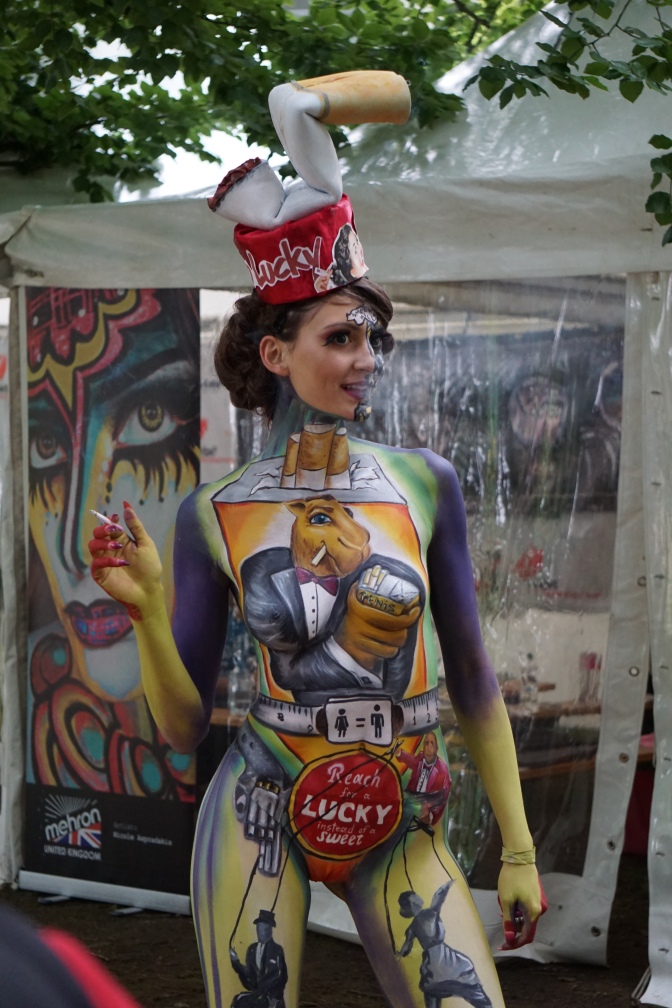 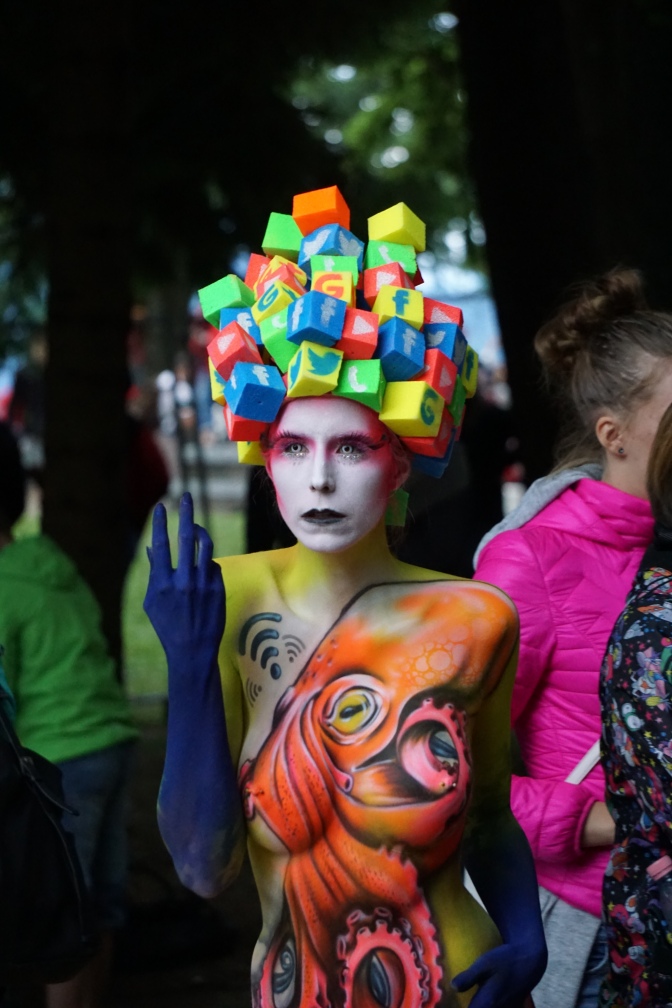 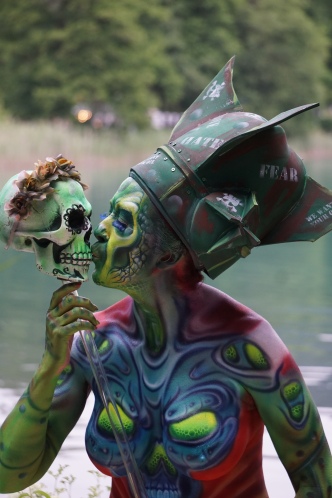 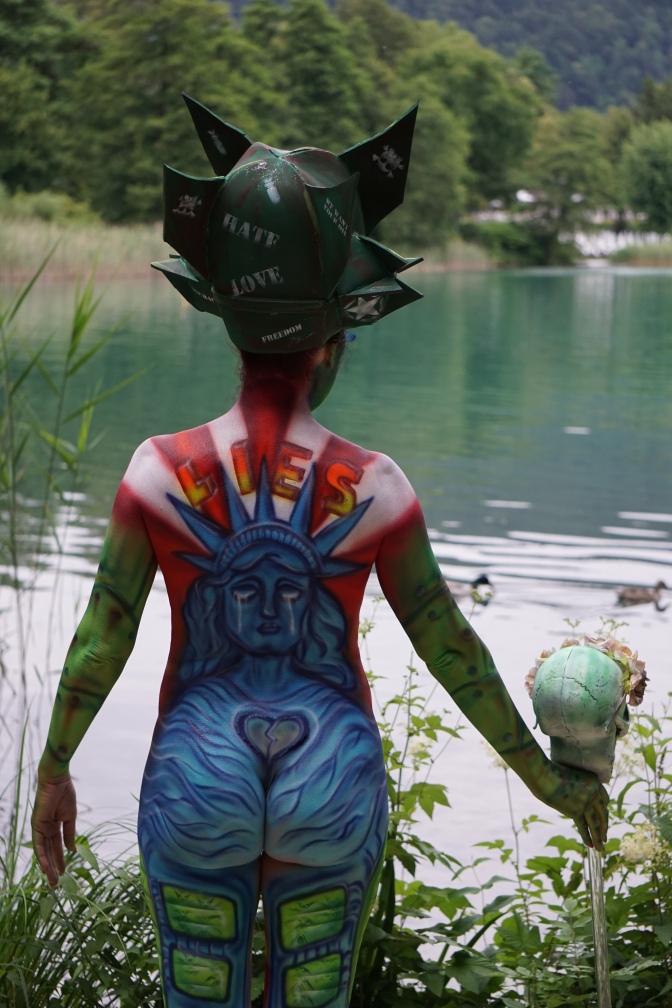 That night the models take to the stage one last time, hoping to round out their performances and earn a place among the top three in their respective categories. The final walks are among the most exciting and defining of the festival. Each team choses music that aligns with the bodypaint and their propaganda-driven message.

I can’t imagine, as a judge, having to choose between all of the impressive, imaginative, intricate displays that I had witnessed all weekend. 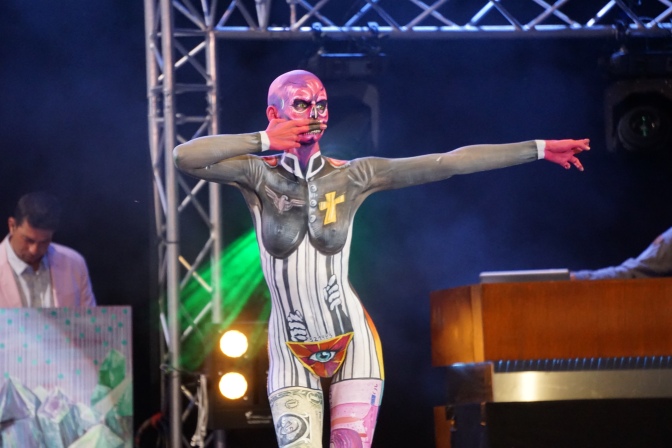 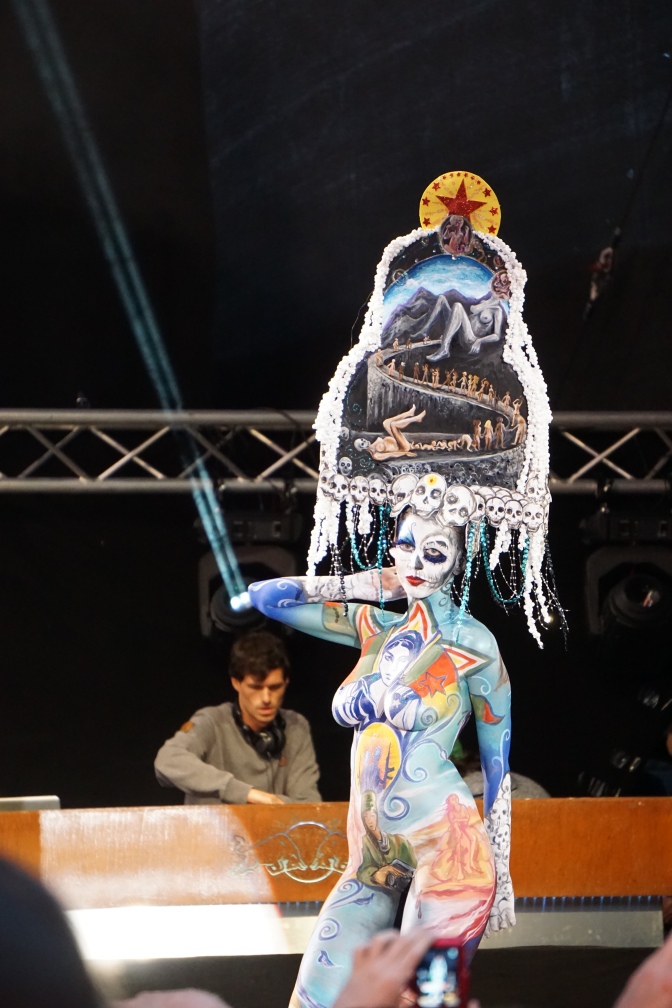 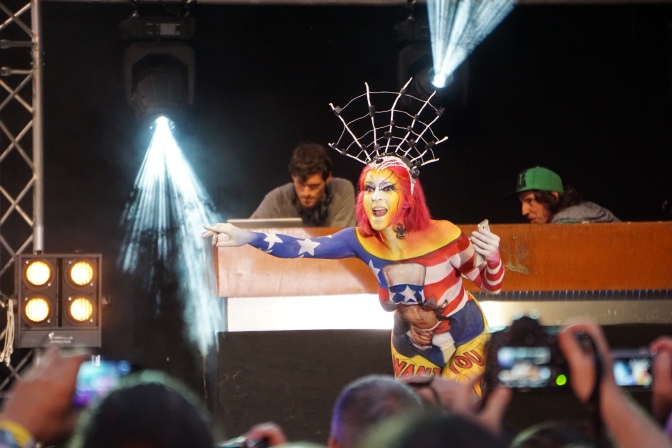 Once all models have taken to the stage, the crowd awaits in eager anticipation as the judges submit their final scores. The announcement of the winners brings cheers from most, but especially from certain pockets of the audience where members of the winning country are gathered.

One of the universal crowd favorites, Sanatan Dinda from India, wins for the Brush and Sponge category, much to the thrill of the audience. He came up just short last year, earning second place, and seems to be overcome with joy and appreciation when he comes out on the stage to accept his prize.

He is from Kolkata and is widely celebrated there and all over India. In addition to bodypainting, he is an accomplished portrait painter. Dinda gained international acclaim when he was commissioned to paint a portrait of Mother Teresa to be displayed in Buckingham Palace in London.

I was lucky enough to run into him after the awards were given. I tell him how impressive his work is and make sure to congratulate him on the victory. Though we didn’t speak for long, he was kind, and his eyes light up when I tell him I worked and traveled in India. 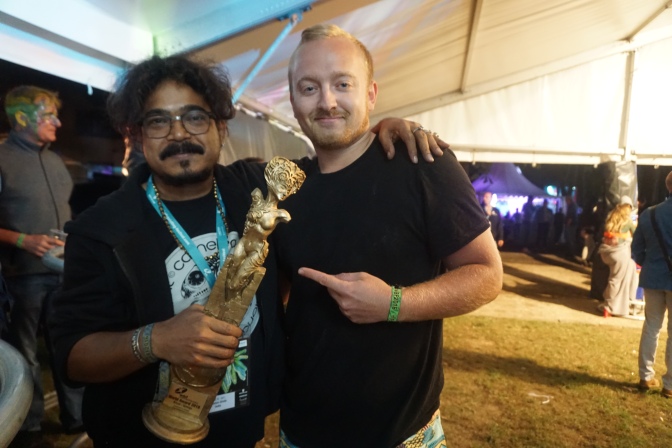 You can see Dinda’s remarkable work over the three days, along with that of the other winners, here.

The cap on the weekend was the infamous “Splash Party”. Everyone was talking about it all day; I was told many times to ready myself for an onslaught of paint. Over the course of the festival I had made friends with a Spaniard, Fran, and an Austrian, Hannes. When the party starts around midnight, the three of of us dive right in. 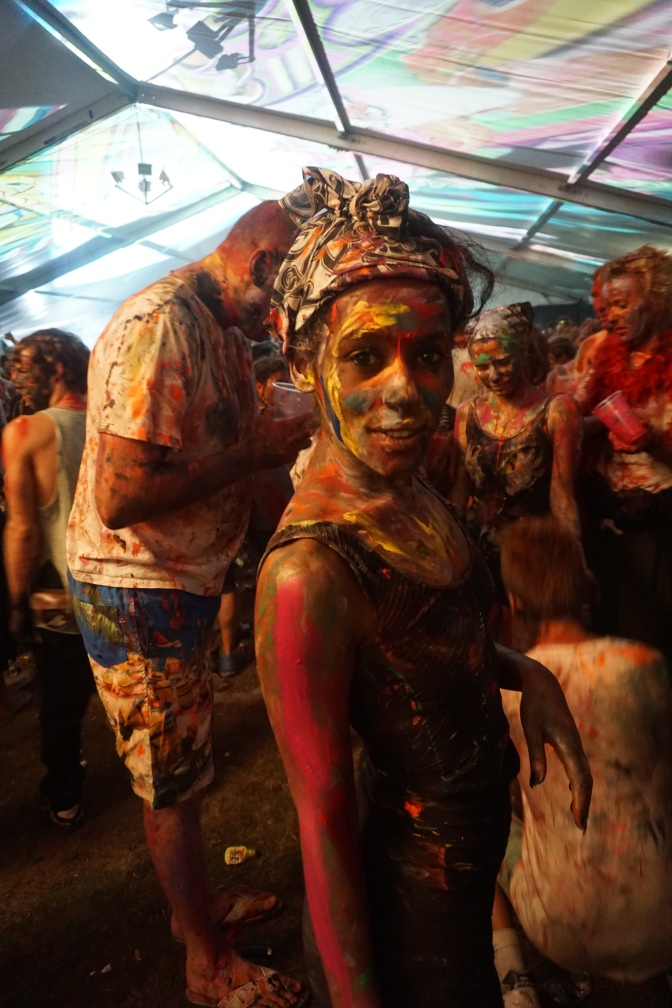 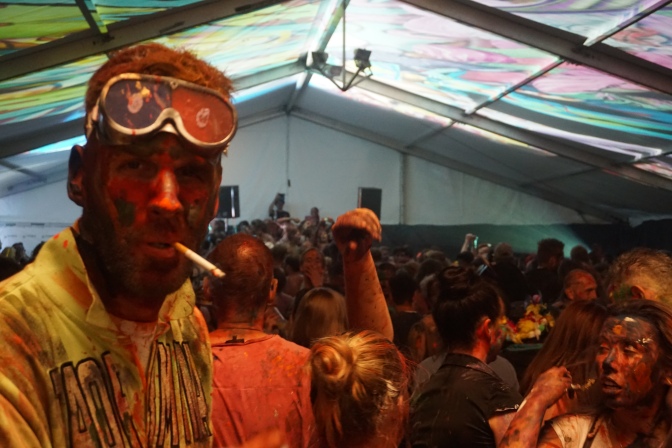 I secure my camera, tucking it away deeply in my bag, before entering the thick of the party. Within minutes I am doused in paint. I find you really aren’t safe anywhere or from anyone. Pallets of paint of all colors are being passed around and lathered on all parts of all people. My eyes begin to burn and skin itches from the gobs of paint, but the music and energy of the crowd is beyond galvanizing. Hours of raving, painting strangers, and getting painted by strangers, would follow.

After a while it gets so intense that I have to get some air. To my delight, I meet another one of the models who I identify as one of the only Americans to compete.

She came all the way from Greensboro, NC! I took a picture of her during the final day, which you can see earlier in this post (she had Obama and Putin painted on her back). She was one of only a few other Americans I met, model or attendee. I told her she worked the stage better than anyone else (American bias aside).

The awesome house, trance, and drum n’ bass music keeps the party going until the wee hours. It was a colorful, messy, ridiculous experience I’ll never forget. In fact, that best summarizes the weekend I suppose.

Artistry and creativity are two skills I cannot claim. My creativity is like a pond of accumulated rainwater on the side of a road. Fleeting, small, uninspiring.  The artists from the WBF occupy a different universe altogether. Their creative energy is like a storm in the ocean. Powerful, profound, unwavering, impactful, moving. I was blessed to step into their arena for a weekend; seeing their work unfold was truly special.

For it is art that has, for so long, empowered the human race. These artists, among many others, will continue to bring color and inspiration to the world. For that I am thankful.