There is something profoundly comforting about arriving in a foreign country and seeing someone holding a sign with your name on it. Or perhaps it’s just not something I’m used to. In 6 months of travel through Europe and Central America I grew accustomed to being dumped in an strange area by bus or train with no one else to rely on except the voice in my head and the things strangers have said on the internet. Neither have a great track record of reliability.

So when Dad and I arrive in Siem Reap, Cambodia, we are welcomed by our smiling, bowing, sign-toting envoy outside the arrival terminal. No need to scramble and decide if I can walk into the city with my heavy bags, or negotiate with some mercurial cab driver. Nope, our hassle-free emissary from the Golden Temple Hotel greets us with a cold towel, water bottle, and a red scarf that he says is traditional wear in Cambodia, then we’re on our way.

The young man takes us to our aircon-equipped van for transport to the hotel. He speaks strong English, but the driver doesn’t, as evidenced by the endearing (and helpful!) sign on the back of his seat.

This would be the first in a series of kind and hospitable gestures from our hosts in Siem Reap, and the Khmer people in general.

Over two nights at the Golden Temple hotel, we were treated to an all-inclusive four course meal at the hotel restaurant, a free Cambodian-style massage, free breakfast every morning, an hour long open bar every night, plus free fruit and other snacks left by the hotel staff. All for the price of the average Motel 6 in the US!

Did I mention the rooms and amenities were awesome?

An airport greeting? Rose petals on the beds? A beautiful pool surrounded by fountains and tropical foliage and lawn chairs? Definitely a stark break from the grime and grind of hostel living. But you won’t hear me complaining.

Needless to say Dad and I are well rested for our day trip to a most epic place the next day: the Angkor Wat temple complex.

Angkor Wat is the flagship monument of Cambodia. No, seriously. It’s literally on the Cambodia flag. When you see it for the first time, it’s easy to understand why. 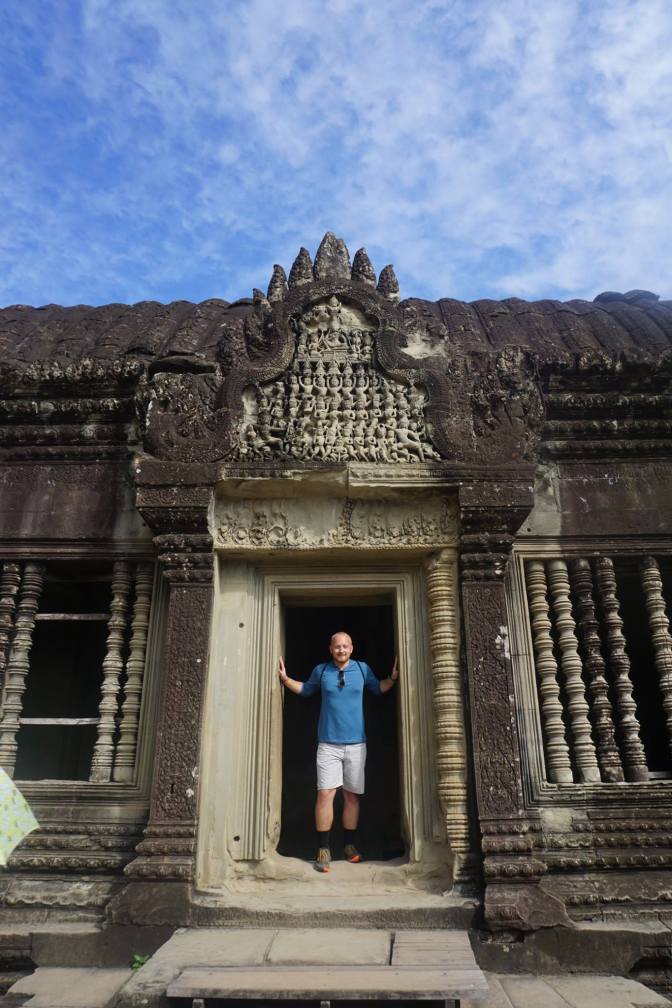 Situated on over 400 acres, the temple complex as a whole is the largest religious monument in the world. It was originally constructed as a Hindu temple during the Khmer Empire in the early 12th century, but has since become a Buddhist temple.

To me the most impressive part of Ankor Wat is its ornate detail. Every window, carving, doorway, shrine, statue and tower, all handmade by chipping away at stone over weeks, months, and years. As we walk through I wonder aloud why it isn’t considered one of the seven modern world wonders. Having seen three modern world wonders personally – the Taj Mahal (Agra, India), Colosseum (Rome, Italy), and Chichen Itza (Yucatán, Mexico) – I can safely say that only the Taj Mahal is more impressive in its scale and grandeur.

Dad correctly points out that Cambodia doesn’t quite have the influence on the world stage to make such a designation, as other countries on the list do. Some sixty years prior to Dad and I visiting, Henri Mouhot, a French explorer credited with popularizing Angkor Wat in the west during the mid-19th century, had this to say after seeing the temple for the first time:

“One of these temples—a rival to that of Solomon, and erected by some ancient Michelangelo—might take an honorable place beside our most beautiful buildings. It is grander than anything left to us by Greece or Rome, and presents a sad contrast to the state of barbarism in which the nation is now plunged.”

Indeed, Cambodia has long had a reputation as a poor, desolate, archaic place. To this day the country continues to endure struggles in the areas of education, health, poverty, and infrastructure, which only bolsters this perspective.

Why, then, have neighboring countries like Thailand and Vietnam been able to make vast improvements in these areas in the late 20th and early 21st century?

I would ponder this question during the rest of our day trip to Angkor, which featured stops at Angkor Thom and Ta Prohm, two more fantastic temples each unique in their own way. 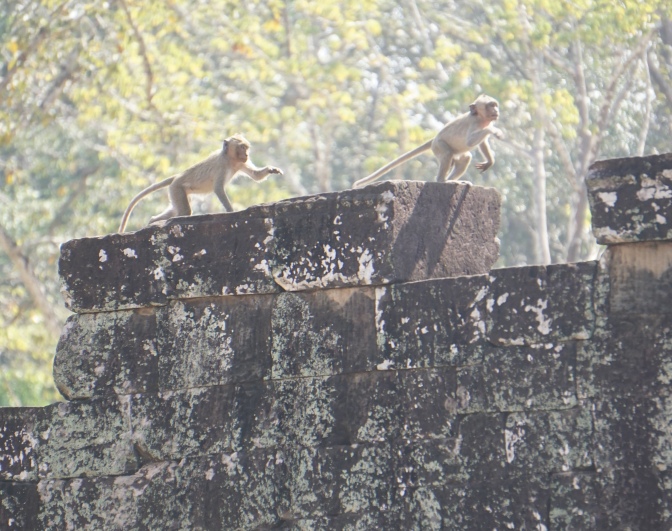 That evening we returned to the Golden Temple Hotel exhausted but enthralled by the sights we saw. If you’re ever planning a journey to Southeast Asia, a trip to Angkor simply cannot be missed. My only regret is that we didn’t have much time. We could’ve rented some bikes and explored the grounds a bit more if we had another day. Next time!

After some dinner that evening we relaxed and watched Killing Fields, a 1984 film about the Khmer Rouge regime, Pol Pot, and the horrific destruction him and his followers wrought during the 1970’s. Check back soon for our next stop, the capitol city of Phnom Penh, where I would learn more about the lingering effects of the Khmer Rouge regime in Cambodia.

9 thoughts on “Wat’s up Cambodia?”