Anyone who knows a smattering of Spanish knows the word “baños”. Whether from high school classes, or from ordering too many tropical beverages at a resort in Cozumel, the word has likely made an appearance in your vernacular if Spanish was ever a necessity. The word, of course, signifies “bathrooms” or “restrooms”, but the direct Spanish meaning is actually just “baths”.

As such Baños, Ecuador, is a candidate for confusing translations. When you read the title of this post, you may have thought to yourself: “what are these paradisal bathrooms and why are they only reserved for adventurers? Are they some sort of new Japanese defecation concoction designed specifically for thrill seekers?”

If this is what brought you here, you might be disappointed to find out that I won’t be talking about futuristic toilets.

Instead, I’ll be discussing Baños, a city about three hours south of Quito, which is named for its therapeutic thermal baths. Though the famous baths are a revelation in relaxation, the city features so much more to see and do. Indeed, unlike the English translation, Baños is not, in fact, shitty. 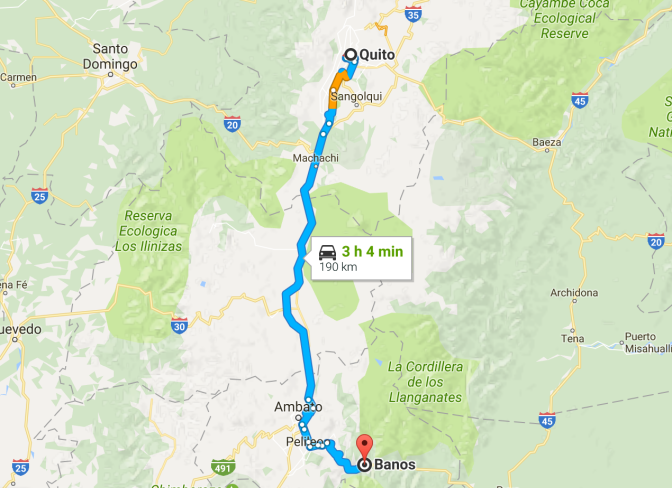 I roll into Baños by bus late at night and make my way to the Great Backpackers Hostel in Barrio Las Piñas. The place is bustling with activity. People are eating, drinking, playing cards or pool, lounging in bean bag chairs and hammocks. As a Chilean named Carlos checks me in, I notice the variety of adventure sports and activities offered on the wall behind the front desk.

Carlos asks me how long I’m planning to stay. I tell him three nights.

“I think you’ll be here for longer”

The young Chileno was right. A week later I finally staggered back to the bus station, sun weary, but with a buzzing sense of inner peace.  My days in Baños were filled with rip-roaring adventure, lively night life, and people I will never forget. It was hard to leave. 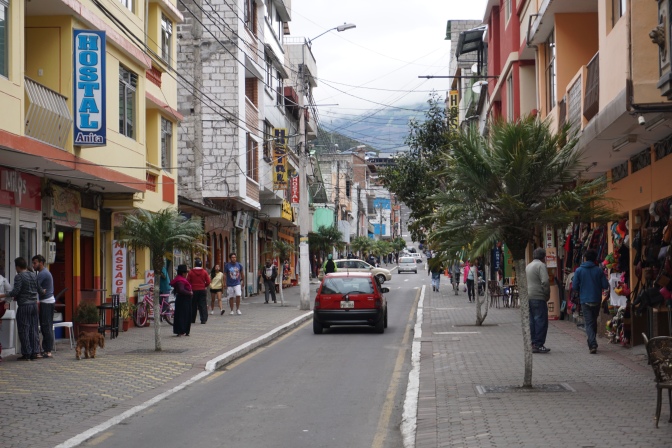 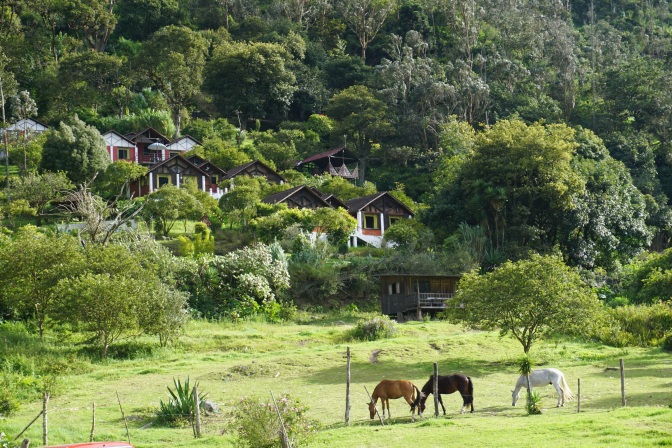 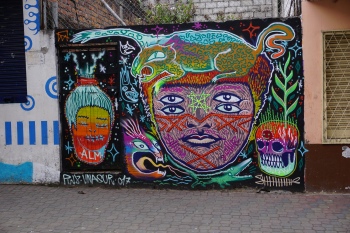 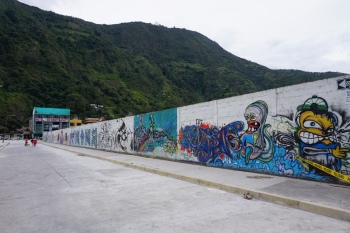 There are also heaps of shops that sell taffy, a mainstay of Baños. Outside workers are seen pulling, stretching, wrangling and weaving the cane sugar candy into form. 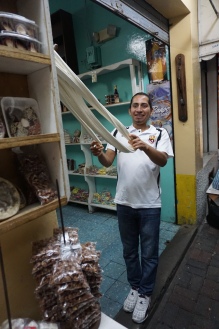 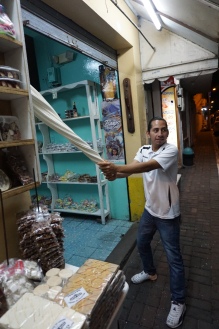 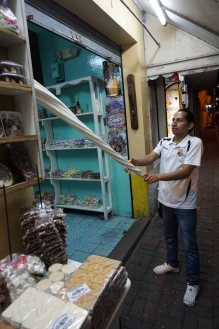 My first adventure sport of choice was whitewater rafting. I had never tried it before, and the price was right ($20, it can be five times as much back in the states). The morning of I get picked up at the hostel and, after an hourlong bus trip, we arrive at our entry point along the rio negro.

We get a brief lesson on paddling technique and staying in concert with other paddlers. In my raft is an American from Montana named Jeff. I tell him in almost a year of travel I had never met a Montanan on the road (in the hostel I also met a girl from Tennessee solo traveling, perhaps an even more surprising encounter). The rest of our raft is filled with three Chilean girls on spring break.

Our Chilean-American vessel takes to the waters and barrels down the winding river for close to two hours.

It was a bumpy and exciting ride. Intermittently we would have periods of smooth sailing when the river would just carry us along and we could admire the stunning scenery.

Our boat capsized twice during particularly rough waters. But this was definitely the most fun part.

Upon returning to the hostel, other folks are relaxing with a beer or rum, reeling from the day’s activities. Baños boasts a full slate of adventure sports and people are often eager to discuss their respective experiences. Itching for the next adrenaline rush, I booked my next venture, canyoning, per the recommendation of several people.

The next day I am rappelling down a series of waterfalls, nothing separating me from plummeting to my death except for a rope leveraged on a rock. The guide helps lodge my hook into a secure position, so all I have to worry about it keeping my footing as I slowly scale my way down the cascading waterway. 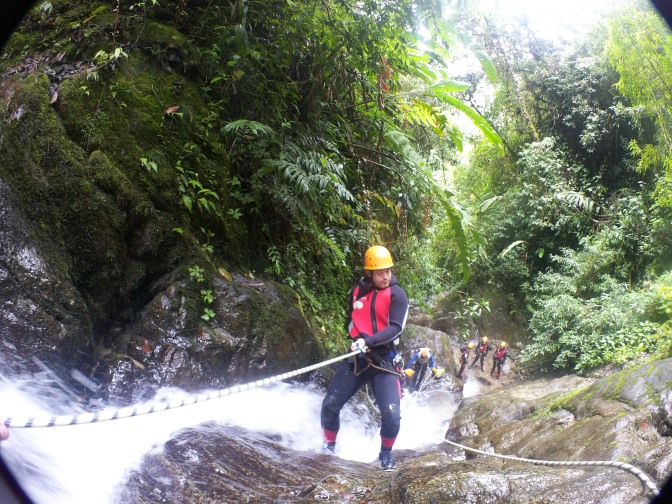 As we progress through the falls, I start to become more comfortable being perpendicular to the ground. I can feel my legs stabilizing easier under me. The feeling of water crashing down on my feet becomes familiar. I become accustomed to the slippery rock shelf hidden behind the falls, smooth like a whetstone. As the guide had been doing the whole time, I start to jump down the falls instead of taking one step at a time.

Leaping out away from the waterfall is thrilling. You feel like you’re bound to crash down to the ground below, but the rope always reels you back in. This makes descents faster and much more fun. My Swiss friend behind me also gives it a go, leaping out further than I had and scaling down even faster. We try to one-up each other the rest of the way.

Most if not all of my ventures over a week in Baños were borne in the hostel; Great Backpackers provides an idyllic setting for meeting people and planning excursions. Free breakfast, free dinner Monday through Wednesday, movie nights, board games, and awful WiFi all factor into the communal vibes.

I meet Josh, a Texan who just graduated and is volunteering his way through South America. He was volunteering at the hostel alongside his friend Nigel, a brilliant Aussie polyglot bursting at the seams with knowledge of futurology, among other things. When not discussing, for example, the possible mining of the asteroid belt with the Aussie, I would hang with a guy from New Jersey, Vivek, a decorated jiu-jitsu fighter with a warm personality that contrasts his fierce fighting methods.

I was shocked to meet Nina, a British girl, whom at just 18 years is traveling solo.  It blew my mind that she was out on her own in South America.  But she is wise beyond her years (attending Oxford in the fall) and totally prepared for the road ahead. Another Brit, Jenny, was also traveling solo. She gave me the most candid and raw opinion of Brexit and the state of her country while laying in the hammocks late one night.

I met Venezuelans escaping their country’s devastating economy, a German couple who were robbed of everything in Brazil yet are still traveling, but perhaps most fascinating were the conversations I had with two people from Basque Country. I had never met someone from BC, the autonomous region of Spain with a language unlike any other on the earth. Thankfully they spoke Spanish as well; talking to them was special. They encouraged me to come visit some day and we exchanged contact information.

All this is to say that Baños seems to attract a spectrum of people from all corners of the world. Young, old, intellectuals, adventurists, and everything in between.

At its core it is a city for adrenaline junkies. But there are plenty of ways to enjoy the lush natural beauty in a less “you-probably-won’t-die-but-who-knows” manner. My other days in Baños were filled with hiking, biking, trips to the hot baths, and a visit to the fabled swing at the edge of the world.

The hostel’s cast of characters takes to the town nearly every night for drinks and dancing. Baños has a thriving strip in the downtown core with herds of partygoers floating in and out of bars or mingling in the streets. We frequent El Leprechaun, hands down the best bar I’ve been to in Latin America. It is a large venue with two floors, a dozen rooms, three dance areas, and a fire pit out back for relaxing. We spent late nights there enjoying each others’ company and trying our hand at salsa (I failed miserably despite my Argentinian partner’s patience).

Rarely do I just plug a place or a city without trying to establish some sort of useful narrative for you to take away, dear reader. This time I’ll make an exception.

Whenever you plan your trip to The Galapagos, or the Ecuadorian Amazon, consider a few days in Baños. Nature, adventure, nightlife, and amazing people, what more could you want (aside from some high-tech poopers)?

Just be careful, a few days in Baños can easily turn into a week, take it from me!