Surreal day at the #medicareforall rally - total dream to march, converse, and hold space with incredible women in the vanguard of the fight for #m4a @coribush @mariannewilliamson @paulajeanwv2020
Belated shots from the Windy City 🏙
Almost heaven, West Virginia 🏕
Congrats #hokiegrad @_annamurphy_ ! Resilience, courage, and compassion has always been your brand. Your tireless work and service to the Blacksburg community over the past year is proof of that, so is your new hat 👩‍🎓. Proud big brother isn’t a strong enough phrase ❤️.
Estamos en la lucha @casa4all ✊🏿✊🏽✊🏻✊
Carved out 1100 sqft in the city I love to call my own! 🔑🏠
Murphlip the Senate 🍑💙
Scenes from the fall (🍁)
It's my birthday 🎉! This month also marks my three year anniversary at @networkforgood. It's been an incredible ride - as the company has grown, so too have the number of partnerships we've been able to foster with small (but mighty) nonprofits, nationwide.
Last week I flew to south Texas and joined a grassroots campaign to send @jcisnerostx_ to congress.
Since everyone and their mother is doing it, I couldn't help but gather some moments in time from the year that rounded out a decade. It was one filled with puppers, laughs, celebrations, volunteering (🇭🇳 & 🏀), travels (🇨🇴 & 🇵🇷), friends, family, and of course, a good duckface here and there. Onto the next 10er.
Some SoFL shots 📸
Happy 2️⃣1️⃣ to my amazing, not-so-little sis @_annamurphy_ 🍾🍾
Get you a squad that can do both 🎃⚾
#tbt rubbing elbows with the Clooneys + celebrating the first annual #asilgala @ the Frick Museum in NYC. Wasn't bold/important enough to get a posed pic with the guests of honor, but did sneak into a few candids (pics 2&3).
Laguna matata, what a wonderful phrase 🚣🏼‍♂️.
Mar rosado, las salinas de Galerazamba 🇨🇴
🇨🇴 views 🇨🇴

On my last morning in Quito I shared coffee with a young man from New York on the rooftop terrace of the Secret Garden hostel. A Yankee through and through, he and I fell into the kind of banter that comes naturally when meeting another product of the American east coast while out in the world.

He has a fascinating story. As a child he left his native Uzbekistan as a refugee due to unrest following the collapse of the Soviet Union. In the mid-1990’s he arrived in the United States without speaking a word of English. Now a few decades later he has an impressive career in IT and has been traveling the world by himself. His powerful words of love for our country and the opportunity it gave him are heartwarming, though we both agree that we should be doing more for refugees currently.

Seeing a kindred spirit, I decide to pass on a book I just finished, Guns, Germs, and Steel, by Jared Diamond, to the Uzbek-American. I had given books to fellow travelers many times, but this was my favorite exchange. He was thrilled.

We shake hands and make promises to reunite stateside before I head off in the early afternoon.

Parting ways with Guns, Germs, and Steel to such a worthy recipient was an easy choice.

The previous evening I had a much more difficult decision to make.  Where do I go for the last month of my yearlong waddle-about? Head south to Peru and face devastating, unprecedented flooding, or head north to the less wet Colombia?

In GG&S, Diamond attempts to outline an ambitious thesis explaining why certain groups of people came to dominate others over the course of history. Early on he ponders the events that led to Spanish Conqueror Francisco Pizarro confronting the Incan King Atahualpa on his home turf in modern day Peru. Why was it not Atahualpa who crossed the Atlantic and met Queen Isabella in her throne room?  How were 300 or so Spaniards able to show up on the Incan doorstep and dismantle an army of 200,000 native warriors?

The short answer, as the books title suggests, is that Pizarro had the advantage of Guns, Germs, and Steel on his side.

I was starry eyed by the opportunity to discover more about the land where this encounter took place. The modern day city of Cajamarca, Peru, is where the two leaders first laid eyes on each other. It is there the spark occurred that kindled the fire we still see burning across the continent. Indeed, Peru was surely the place to further my understanding of how modern Latin America arrived at its current state ethnically, socially, and culturally.

As such choosing Colombia was a difficult decision. I had simply heard from too many northbound travelers that Peru was a nightmare at that moment. The torrential rains had led to thousands being displaced, crumbling infrastructure, a clean water shortage, accumulation of disease-carrying insects around mud pools, and heightened presence of robbers on highways due to the closure of back roads.

The Gods (Incan or otherwise) clearly had other plans for me. My dream of walking where Pizarro and Atahualpa stood toe-to-toe, and hopes of seeing Machu Picchu, were temporarily dashed. So it goes.

Luckily another eye-bleaching manmade wonder awaited me shortly after entering Colombia. But first came the task of reaching and crossing a historically dangerous border.

From Quito I bussed for close to five hours up the Pan-American Highway to a city called Tulcan. From there I took a 10 minute taxi to the border, which I shared with a talkative Quiteña woman. “What are you going to buy in Colombia?” she asks me. I tell her I’m not going to Colombia to buy things, I’m going to see the country. She explains that things are much cheaper in Colombia, so she is going to buy clothes for her whole family.

By the time we reach the Ecuadorian immigration it is already dark.

Across Latin America I’ve found borders to be a unique amalgam of militarized, draconian processes and unchecked chaos. The Ecuador-Colombia border was no exception.

After getting dropped off I walk a couple blocks, weaving through other travelers, policeman, soldiers, howling food vendors, hawkish merchants offering Colombian Pesos for US dollars, honking vehicles, and stray dogs, before arriving at the immigration office. A 30 minute wait in line and one passport stamp later I am ready to leave Ecuador. The immigration officer points me toward Rumichaca, a bridge about a football field long which I am meant to cross on foot.

And so with my whole life on my back, I walk across a bridge and take my first steps into Colombia.

Though considered by many to be South America’s most dangerous border, I felt safe throughout the whole process. Policemen and soldiers toting big guns were abundant and the bridge was well lit. The border’s dangers lie mostly in the jungles, where the drug trade and guerilla forces lurk.

That said, I still felt a great relief after crossing the bridge and getting stamped at immigration.

My first stop is Ipiales, a city about four miles from the border. My lone night there I spend in a hotel room that costs 30,000 Colombia Pesos ($10) and eat a sizable dinner of chicken, beans, rice, plantains, salad, and juice for less than $2.

Ipiales itself features a bustling array of stores and streetside vendors. It is a true market down, borne out of the stark difference in prices between Colombia and neighboring Ecuador. I’m sure the Quiteña I met had no problem finding cheap, imported knockoff jeans, jackets, shirts, and the like. 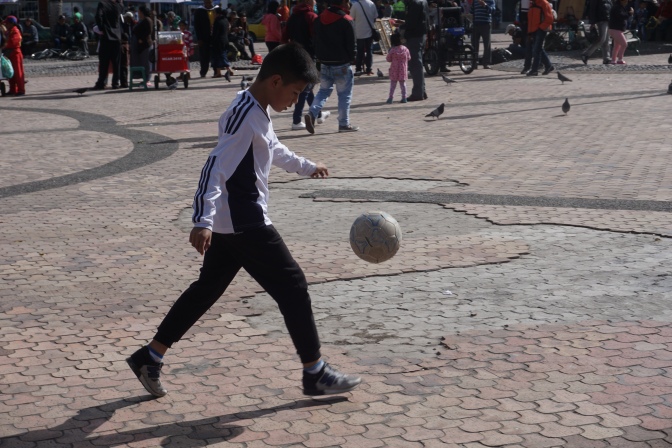 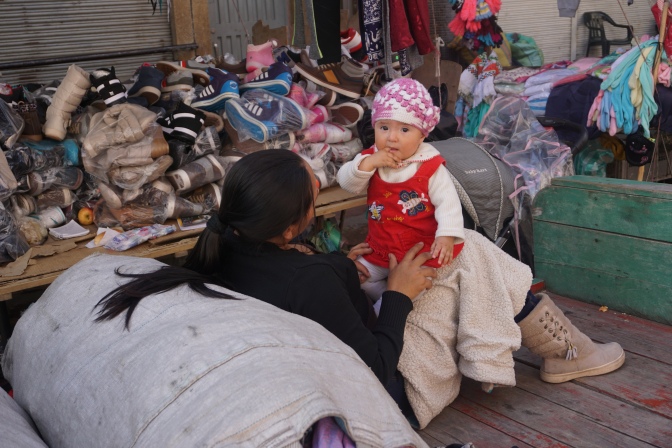 Though the Ipiales markets and plazas are charming and a hotspot for cheap finds, there is another draw to the city that begs to be seen.

Las Lajas Sanctuary is about a 30 minute taxi ride outside the city center (ask around for “taxi colectivos” for a cheaper, shared ride), followed by a 20 minute descent by foot into a canyon. On the way there are tons of vendors looking to capitalize on the site’s popularity. You can even have your picture taken with some lavish llamas. 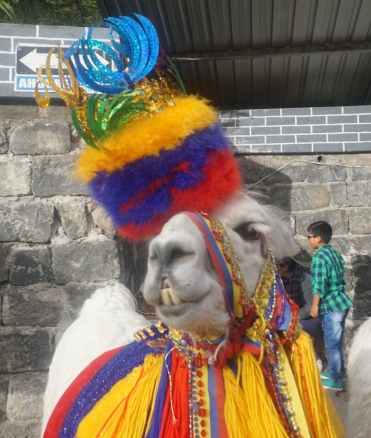 My eyes glaze over when I reach my destination.

Rising up 100 meters (more than a football field!) from the bottom of the canyon, Las Lajas is like something straight out of Lord of the Rings.

Its ornate, neo-gothic style architecture and grand facade coupled with the sweeping, lush landscape, and flowing Guaitara river below altogether make for a visually arresting scene. It’s hard to believe this was a structure crafted by human hands; I’m not entirely convinced some passing God didn’t just summoned it out of the earth.

Indeed, the staggering beauty of Las Lajas has made it a hotbed for legendary tales:

“According to popular belief, the Virgin Mary appeared to a woman and her deaf-mute daughter in 1754 at exactly the same place where the church is now standing.The woman, Maria Mueces, and her daughter, Rosa, were passing by the Guaitara river when they found themselves hiding from a storm. At that moment, Rosa shouted “Mum, the Virgin is calling me!” and pointed to the appearing virgin. The woman kept quiet about the miracle until something even more incredible happened. When Rosa died, Mueces returned to the place where they had seen Virgin Mary to pray for her daughter’s soul. The virgin then miraculously revived Rosa, and mother and daughter could no longer keep the miracle a secret.”

The alleged appearance of the Virgin Mary one of many legends associated with Las Lajas.

Another legend involves the painting of the Virgin Mary above the altar at the back of the church (see above picture). No one knows who the artist is. According to the legend the image was seen first when Maria Mueces wanted to show a priest and other locals where her daughter had been revived.

The image draws thousands of pilgrims every year.

Las Lajas proved to be the first of many wonders in Colombia.

Across the board, the country proved every bit as fascinating as I could’ve hoped. Ultimately, I have no regrets choosing it over Peru.

Check back soon and follow along as I recount my month in this amazing country!