Mile High Moments 💍🏔 #denver
Happy birthday to my insta-lurking, wacky, weird, fierce, determined, sweet, benevolent & radical compañera 🎉🥳@lisal_chidc
Surreal day at the #medicareforall rally - total dream to march, converse, and hold space with incredible women in the vanguard of the fight for #m4a @coribush @mariannewilliamson @paulajeanwv2020
Belated shots from the Windy City 🏙
Almost heaven, West Virginia 🏕
Congrats #hokiegrad @_annamurphy_ ! Resilience, courage, and compassion has always been your brand. Your tireless work and service to the Blacksburg community over the past year is proof of that, so is your new hat 👩‍🎓. Proud big brother isn’t a strong enough phrase ❤️.
Estamos en la lucha @casa4all ✊🏿✊🏽✊🏻✊
Carved out 1100 sqft in the city I love to call my own! 🔑🏠
Murphlip the Senate 🍑💙
Scenes from the fall (🍁)
It's my birthday 🎉! This month also marks my three year anniversary at @networkforgood. It's been an incredible ride - as the company has grown, so too have the number of partnerships we've been able to foster with small (but mighty) nonprofits, nationwide.
Last week I flew to south Texas and joined a grassroots campaign to send @jcisnerostx_ to congress.
Since everyone and their mother is doing it, I couldn't help but gather some moments in time from the year that rounded out a decade. It was one filled with puppers, laughs, celebrations, volunteering (🇭🇳 & 🏀), travels (🇨🇴 & 🇵🇷), friends, family, and of course, a good duckface here and there. Onto the next 10er.
Some SoFL shots 📸
Happy 2️⃣1️⃣ to my amazing, not-so-little sis @_annamurphy_ 🍾🍾
Get you a squad that can do both 🎃⚾
#tbt rubbing elbows with the Clooneys + celebrating the first annual #asilgala @ the Frick Museum in NYC. Wasn't bold/important enough to get a posed pic with the guests of honor, but did sneak into a few candids (pics 2&3).
Laguna matata, what a wonderful phrase 🚣🏼‍♂️.

This month marks two years since I began writing A Wayward Duck.

If you’ve been with me since the beginning, you have seen a lot of the places, faces, cultures, and curiosities that I’ve encountered across the world. (If you’re new here, welcome! Hit the follow button for stories and travel inspiration delivered to your inbox.)

It is long past due that I opened up this platform to share the voice of another traveler. As luck world have it, I had a world class writer, and 26-time reigning Mom of the Year award winner, willing to share her story. Read on to hear about an experience in Lviv, Ukraine, narrated by my wonderful mother, Julie Murphy

Last fall, I had the opportunity to accompany Jack’s father, Sean, on a trip to Ukraine.  He had been invited to speak at a conference titled “Placeless/Placeness: Ideas of Rights and Justice in Eastern Europe.”

I came away from those four, cold days in western Ukraine with my own renewed sense of the importance of placeness: a place at the table, a place to call home.

In large part, the conference emerged from a book called East West Street: On the Origins of Genocide and Crimes Against Humanity.  It was written by a long-time colleague of Sean’s, Phillipe Sands, and follows the lives of four men, all of whom were connected to the city of Lviv, Ukraine (then a part of Poland) in the early 20th century:

The great majority of the families of Buchholz, Lemkin and Lauterpacht died during the Holocaust.  In one scene in the book, Phillipe describes a moment in July 1942 in Vienna when both his maternal and his paternal great grandmothers – Rosa and Malke — were rounded up to be taken by train to the concentration camp at Treblinka:

“It was a haunting image, two elderly ladies on a platform at the Aspangbahnhof, each hanging on to a small suitcase, two among 994 elderly Viennese Jews heading east.”

Among those in the same transport were three of Sigmund Freud’s 70- and 80-year old sisters: Pauline, Maria and Regina.

The day that I believe will always stay with me was our last one.

We drove north from Lviv, about 45 minutes, to Zolkiew. It was a Sunday morning, a bright but wet feeling Sunday morning in a small community in Ukraine.  Our first stop was a home where a young Jewish girl named Clara and others hid for almost two years during the war.

We were invited in to see her hiding place.  There in the bedroom a portion of the floor had been removed like a jagged piece of a large puzzle to reveal the crawl space where Clara and the others huddled for 20 months.  It was in someone’s home, someone’s bedroom.

There were people about that morning.  One man was pushing a toddler bundled in a snowsuit; several older women with scarves tied around their faces pushed past us.  There were three churches, all having their Sunday masses. One was a remarkable all-wooden structure. Another was gold-domed, clean, white-washed.  We could hear the music of multiple Sunday masses.

Then we turned down a street.  We passed modest homes and small stores.  There in the middle of the block it stood, windows broken, surrounded by a leaning construction fence:  the synagogue of Zolkiew, built in the 1690s. We went inside. We were told about the bombs placed inside by the Germans in June, 1941; the roof was damaged but the walls of the synagogue stood.  Here you can see the synagogue as it burned and the German soldiers milling nearby:

It was cold and cavernous inside.  Someone had stacked broken tiles. We were told there had been and would be efforts to restore it, maybe.  But there are no Jews to worship there. Zolkiew (which was in Poland at that time) had about 4000 Jews before the war.

That morning in November, I saw places: places of worship in that small town, one full of life and music and another echoing with reminders of death.  I peered into a dirt-floored area beneath a modest bedroom that had been a home to human being for almost two years. Another place. Now, some six months later, I am struck by how many humans today are without a place to call their own, displaced by war and poverty, and give thanks for all of those who help us remember and who work for peace and justice. 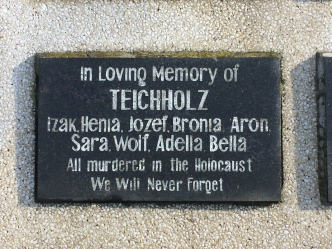 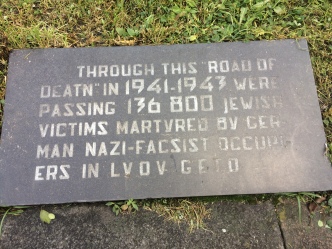 Commemorative plaques in the city center of Lviv

Thank you for sharing, Ma, and for putting your learnings and feelings into words.

Interested in sharing a travel story on A Wayward Duck? Leave me a comment and let me know!